Vegan cinnamon stars. Soft, nutty, sweet and cinnamon loaded Christmas cookies with vegan egg whites! These cinnamon stars are made simply and without substitutes, perfect as a gift, delicious and should not be missed in your Christmas bakery! 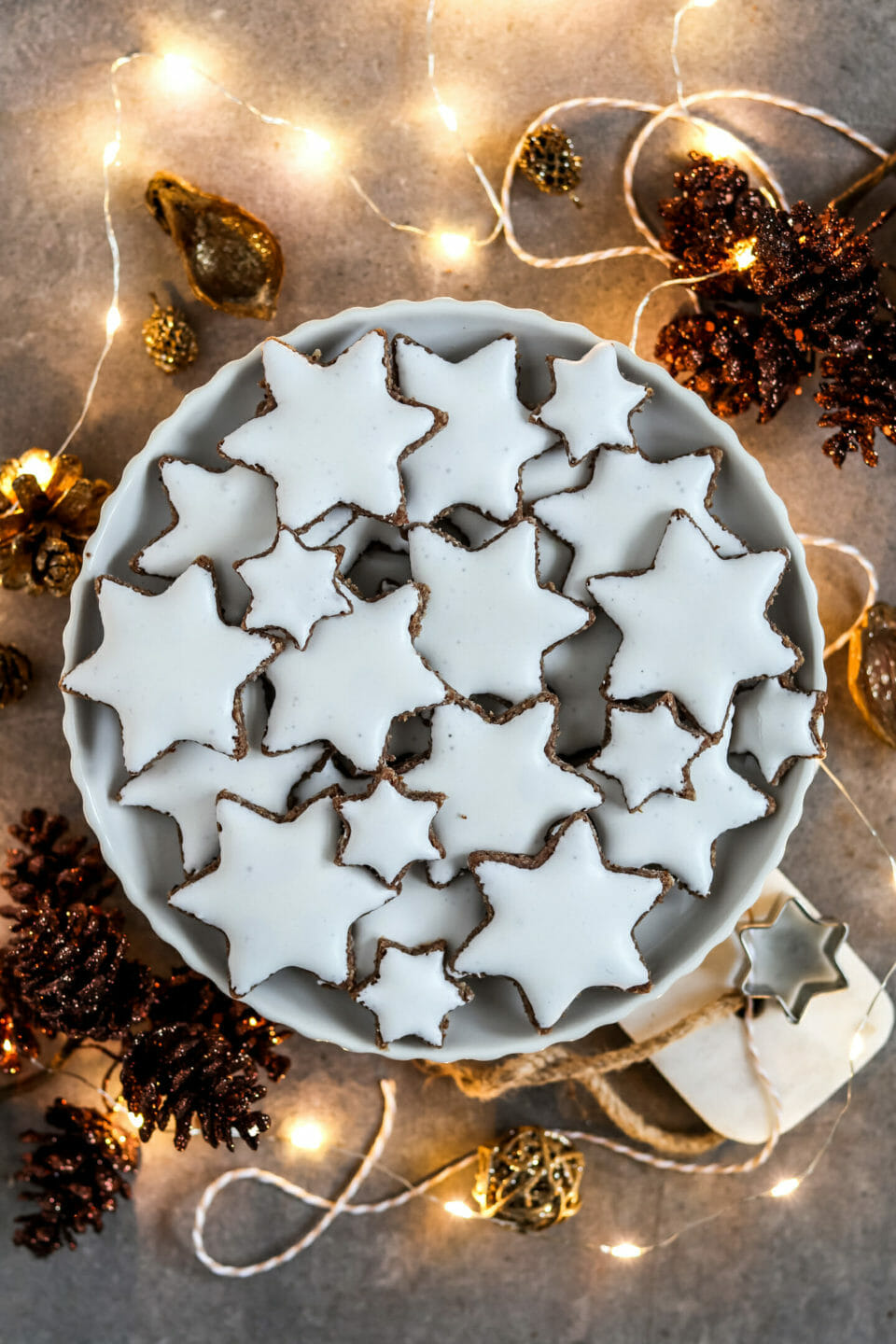 Cinnamon stars are classics at Christmas! I love the soft, nutty and sweet biscuits full of cinnamon and crunchy egg white bonnet. Egg white…let’s talk about it!

When I started to eat vegan a few years ago, I had my doubts about vegan baking. I had no experience and did not know how everything should work without eggs and butter. But if you once (or maybe twice 😉 ) try it, you will soon realize that it is actually quite simple and uncomplicated. You do not need replacement products that you do not know where to get them, nor any special kitchen accessories.

In fact, shopping at the supermarket is totally enough! No more whipped egg whites! And snacking is allowed, because we don’t need any raw eggs! Butter can be easily replaced by a vegetable margarine. 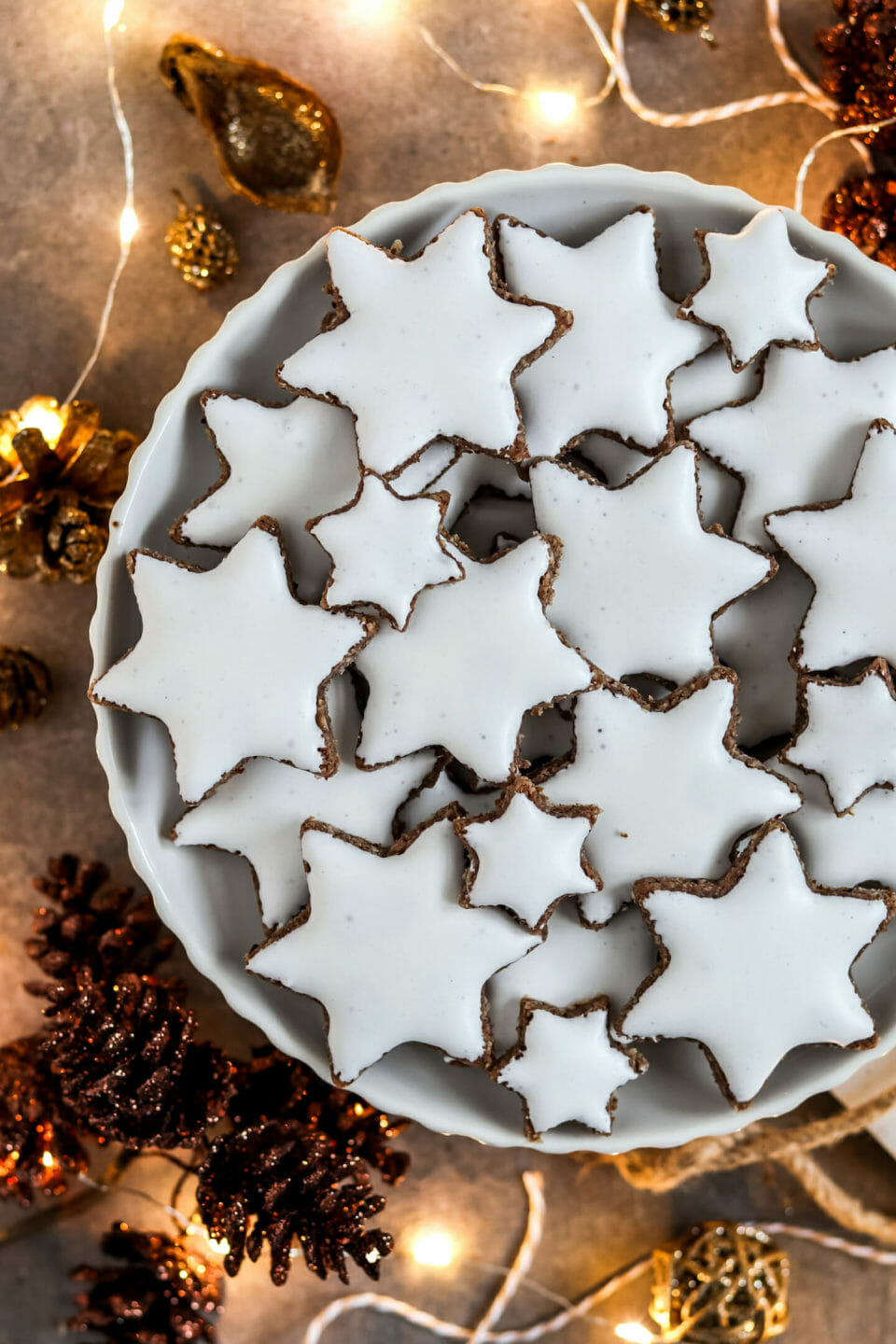 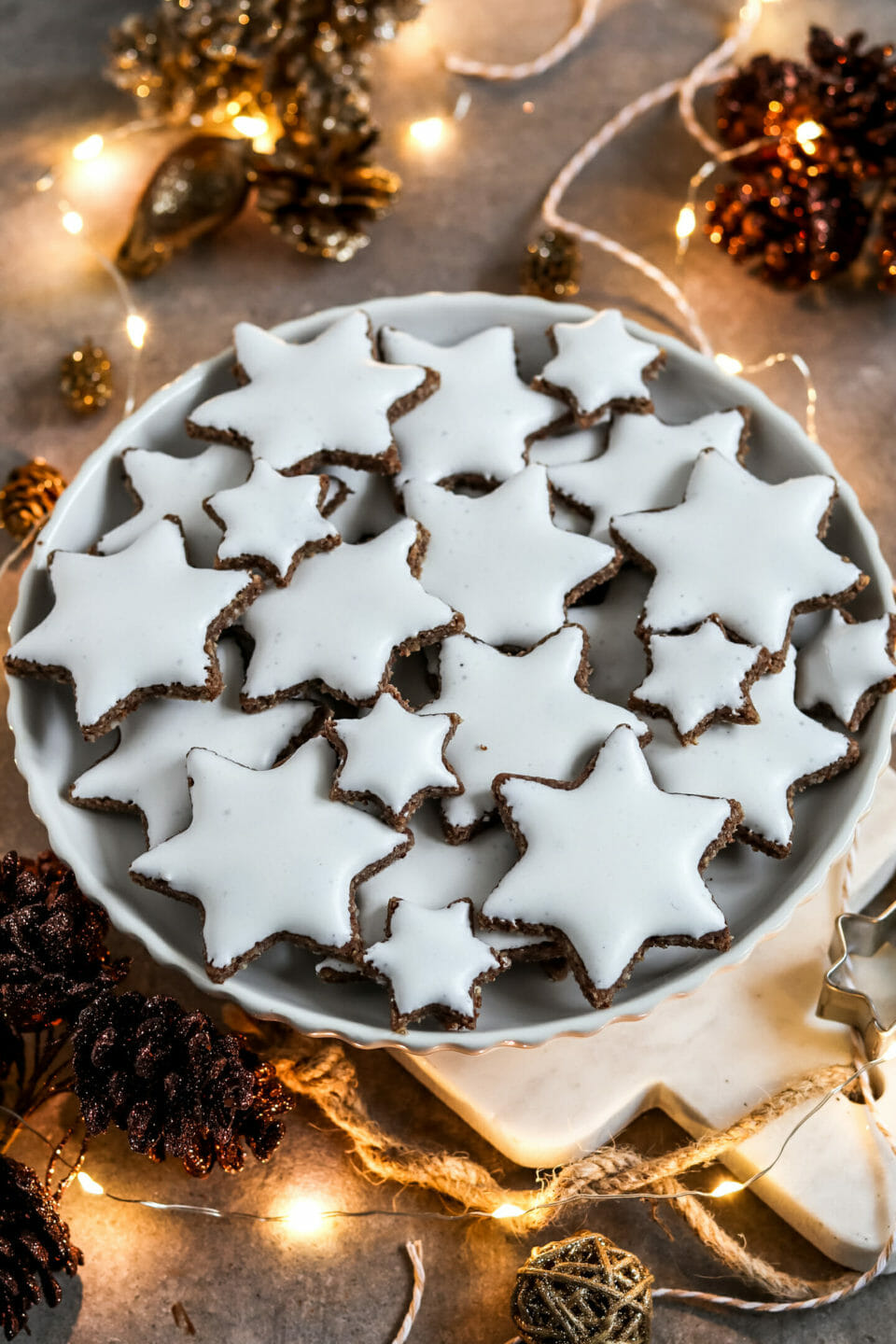 I know, I know. It sounds weird. When I experimented with chickpea water for the first time, I was super skeptical! I tried a vegan chocolate mousse made from chickpea water. And it was SUPER DELICIOUS. So delicious that I even served it to my dad. And you know what he said? “That’s the best chocolate mousse I’ve ever eaten.” YES!

So. Being skeptical is fine. Do not try it out therefore is not fine! This recipe is one of those recipes that is definitely worth throwing all the prejudices over board and trying them out!

But there’s salt in the aquafaba?!

… that doesn’t matter! And you can not taste it! The salt that is contained in the jars or cans of cooked chickpeas is so low that you will not even taste it out. Again, be sure to convince yourself! In addition, a pinch of salt in baking should not be missing  ;-). 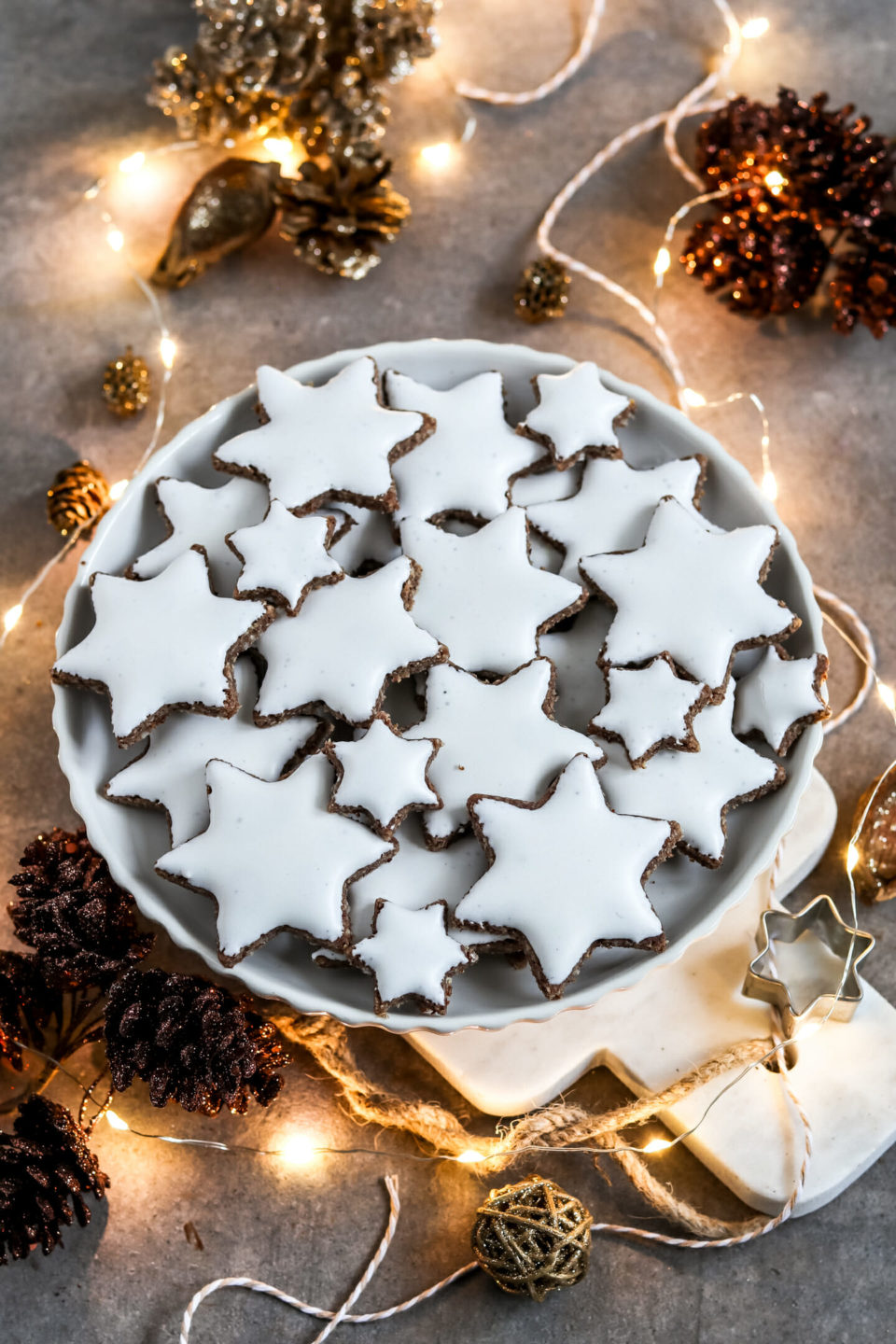 The recipe is simple and so is the list of ingredients: the dough for the cinnamon stars is kneaded from powdered sugar, ground nuts, cinnamon, grated orange peel, a little lemon juice and water and placed in the refrigerator for an hour. Then roll out, cut out cookies and let them dry for two hours.

In the meantime, prepare the vegan egg whites. To do this, the aquafaba (like egg whites) is whipped with powdered sugar and vanilla sugar with a hand mixer until a creamy, viscous mass is formed.

Spread this on the dried cookies and bake briefly in the oven. The baking time is only 10 minutes. They shouldn’t bake for longer, otherwise cracks may appear on the surface. That’s it.

The recipe for the vegan cinnamon stars is super simple, delicious and you only need a few ingredients that can be found in every supermarket. Convince yourself! 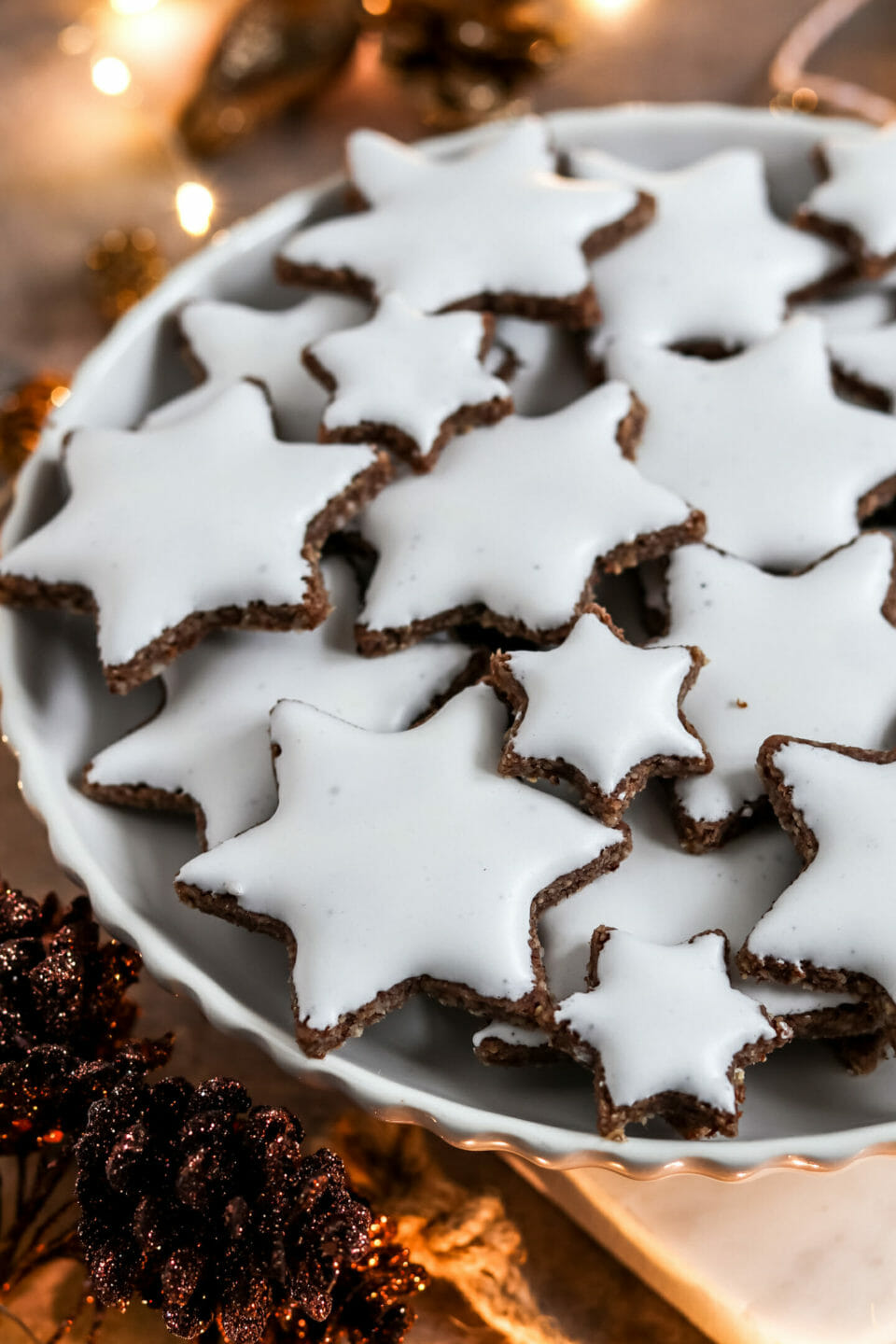 If you make these vegan cinnamon starts, be sure to leave a comment and / or give this recipe a rating! I love to hear from you guys and how my recipes tasted to you! If you do make this recipe, share your creation on Instagram as a photo and use the hashtag #byanjushka. Always so happy to look through your photos of recipes! 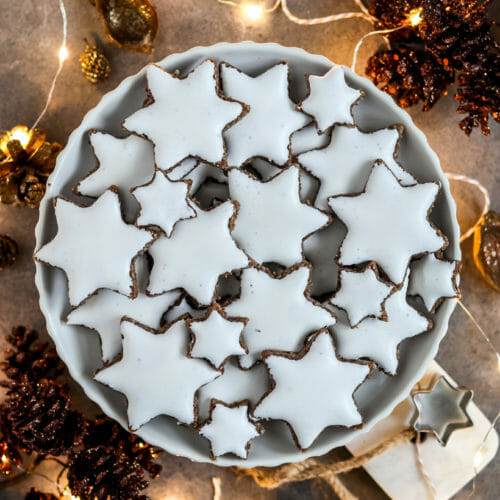