Vegan cinnamon swirl banana bread with crispy crumble and vanilla glaze. The autumnal and cinnamon version of the delicious classic. A vegan and moist banana bread made from bananas, a sweet cinnamon-sugar swirl and crunchy cinnamon crumble.  Perfect for cold autumn and winter days. The banana bread is easy and quick to make, requires only a few ingredients and perfect as a sweet breakfast or dessert. 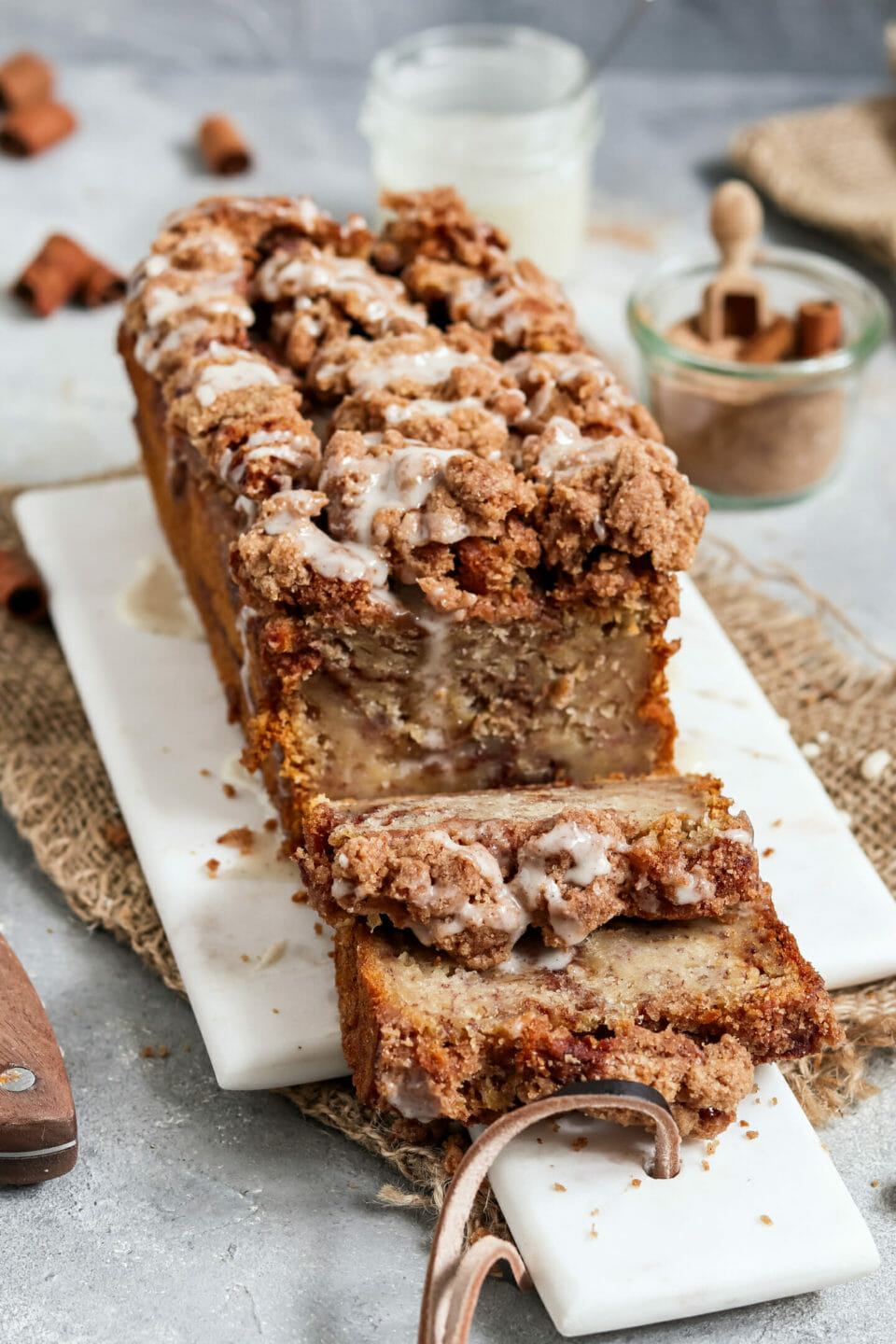 Once again I had a few ripe bananas left that should definitely be used. The following options were available: (1) Eating 3-4 bananas. (2) Freeze and save for Nice Cream (banana ice cream). (3) Banana shake. (4) Banana bread. I was able to quickly rule out options (1) and (2). Even for a banana lover like me, so many bananas would be one time too many: D. And I wasn’t in the mood for ice cream. Not when I come out of the cold with a red nose. Option (3) was quite tempting. But nothing is as tempting as the prospect of one (4) banana bread. 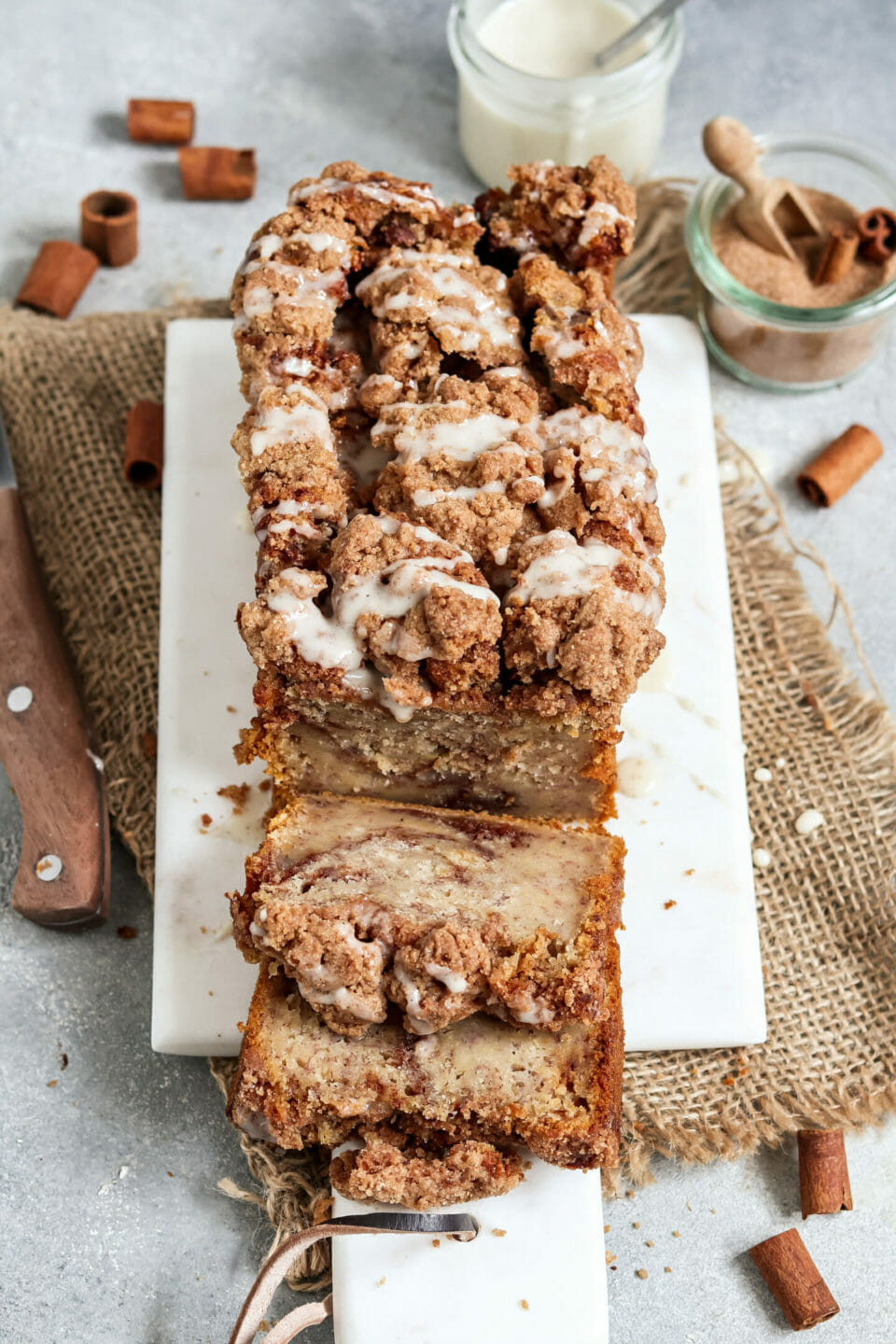 What sounds so “fancy” here is actually made very simple.

You’ll need two mixing bowls, a whisk, and a fork (or something else to mash the bananas). First, mix flour, baking powder and salt in a mixing bowl. In the second bowl mix the oil, vegan milk and sugar  with the whisk. Optionally, you can add vanilla extract or use a vanilla-soy milk. I really like the vanilla aroma.

Mash the bananas with a fork (also works with a potato masher). Then carefully stir the bananas together with the liquid ingredients into the flour mixture and stir only briefly to form a dough. This is important! Be careful not to stir the dough too much, but only until everything is well mixed together, otherwise it could get “greasy”. 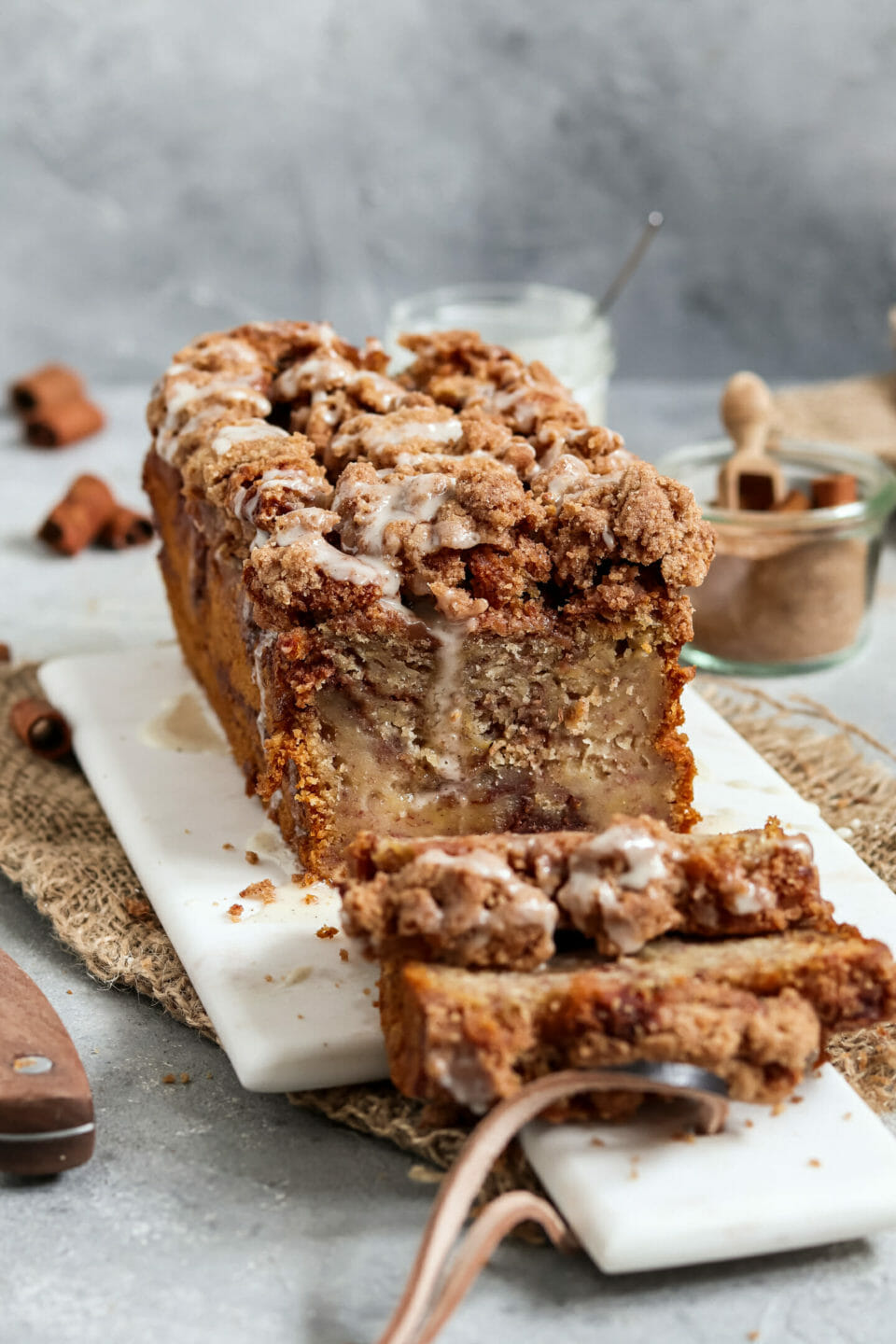 The cinnamon swirl is a simple cinnamon-sugar mixture. First, about half of the banana bread dough is distributed in a lightly greased dish. Sprinkle the cinnamon sugar generously over it and then pour the remaining dough into the mold. For the swirl, pull a fork through the dough in a spiral. Here too: less is more!

Finally, the banana bread is covered with sweet cinnamon crumbles. My absolute top tip: use brown sugar. This not only gives the crumbles a delicious taste, but also makes them extra crispy. 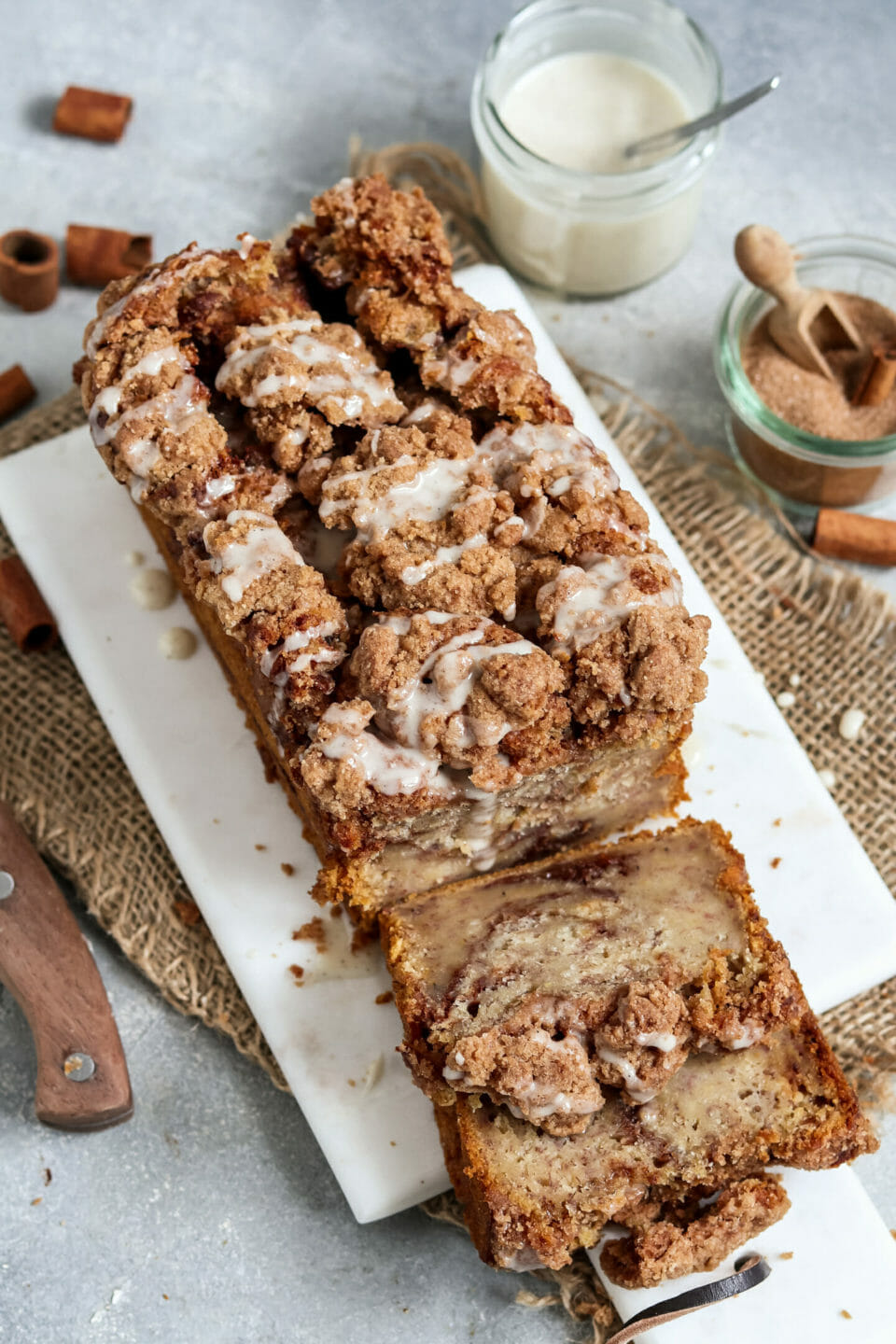 And whenever you think it can’t get any better, THE idea comes up: D. I guess I thought something like that when I was serving it up. Do you remember the pumpkin cake with cinnamon glaze? The combination was so delicious so I made a vanilla glaze from just three ingredients. And believe me: the vanilla glaze is the cherry on the cake…like we say here in Germany ;-). 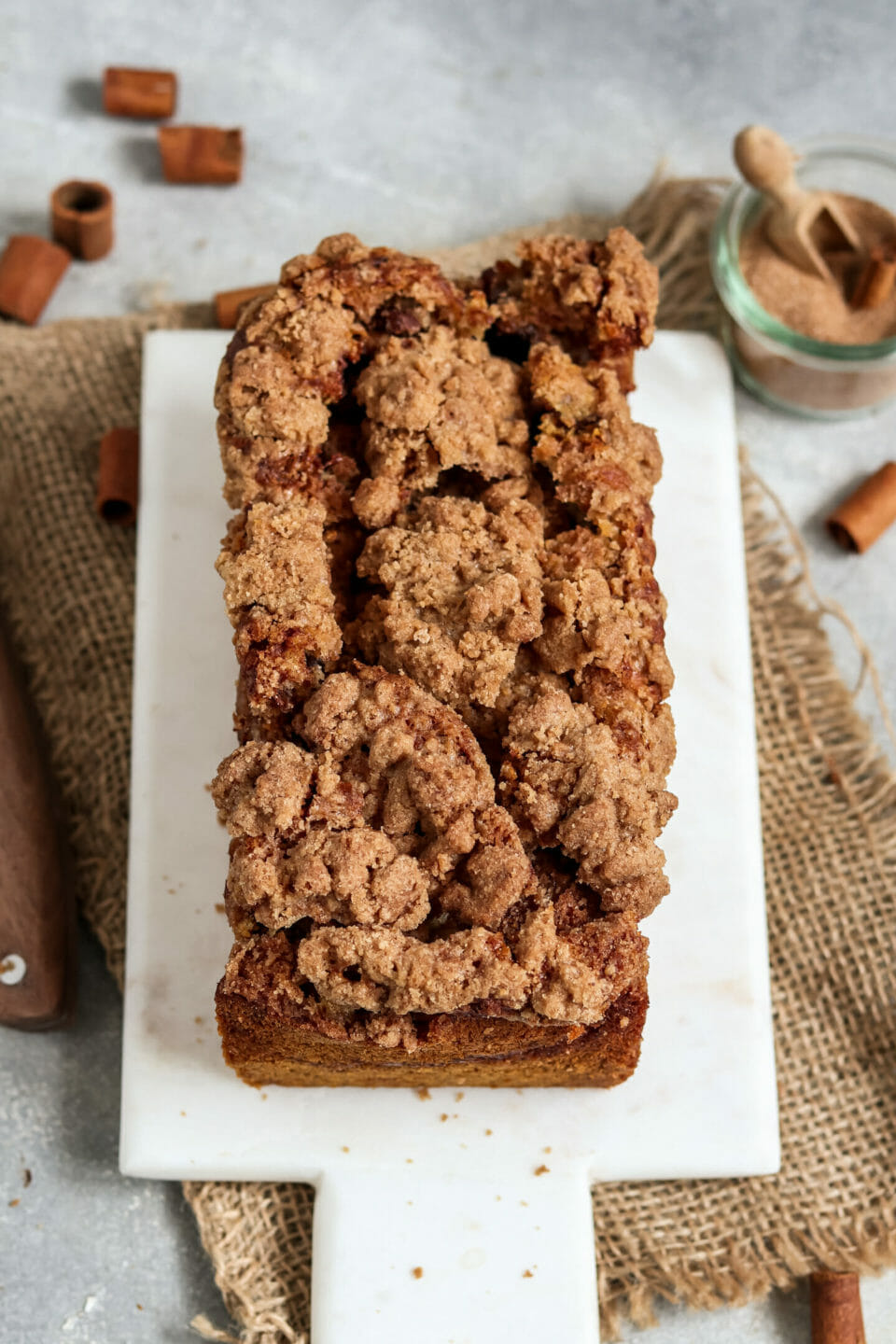 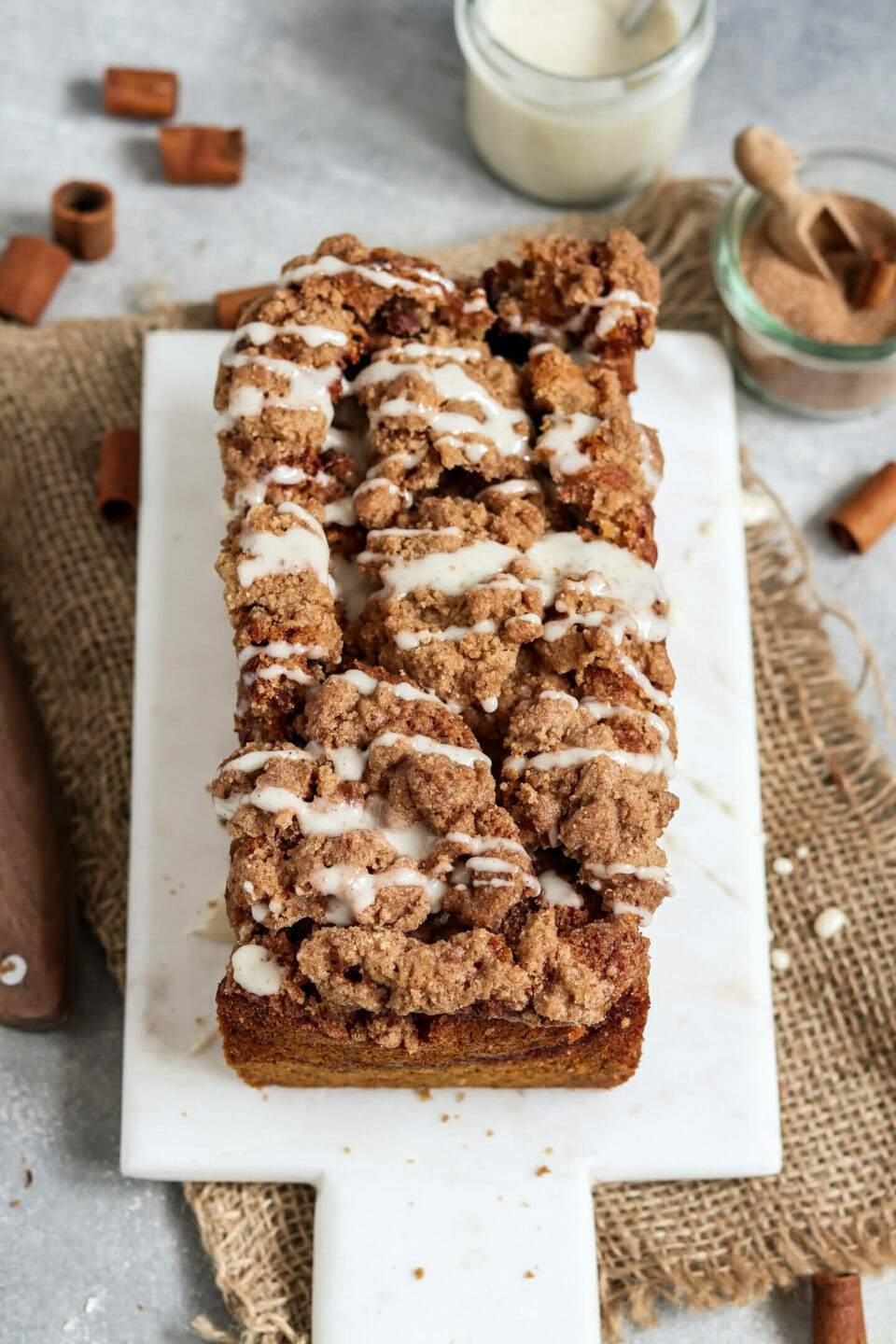 How to bake the perfect banana bread

When preparing, less is more. It is important not to over-stir the dough to prevent it from becoming “compact” and “greasy”. In this case it is sufficient to just briefly stir the ingredients together.

I have also found that the banana bread becomes particularly “fluffy” when I mash the bananas with a fork. Not too fine either, so that little bits remain. The more it resembles a liquid “puree”, the more “compact” it can become.

However, these are only experiences that I have gained in recent years. Please leave me your TOP TIPS!

And now: have fun baking and enjoy it <3.

Looking for more easy baking recipes? Try one of these…

If you make these vegan cinnamon sugar pretzels, be sure to leave a comment and / or give this recipe a rating! I love to hear from you guys and how my recipes tasted to you! If you do make this recipe, share your creation on Instagram as a photo and use the hashtag #byanjushka. Always so happy to look through your photos of recipes! 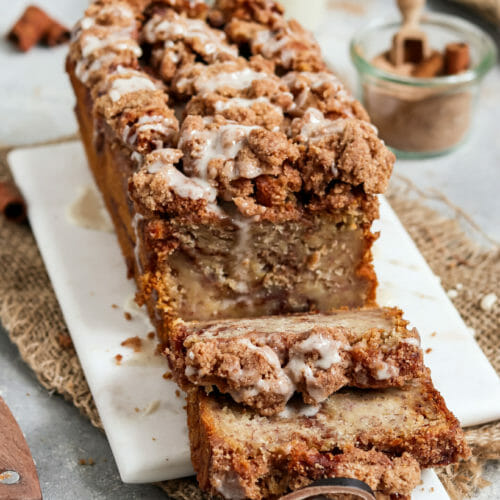 Hello, I made this recipe and tastewise it was delicious . It did come out a little dense and half the height of the one on your picture. You did mention not to over mix and thought I didn’t. I mixed until I didn’t see any dry ingredients. Maybe that’s why it was dense? It would be great if you had a video on how to mix the ingredients.
Thank you for this recipe! 🙂