Vegan Fettuccine Alfredo with pan-fried Brussels Sprouts and crispy coconut bacon. An easy and quick recipe for a delicious and creamy pasta sauce made from cauliflower. Yeast flakes provide the “cheesy flavor” and cashew butter makes the sauce particularly creamy. The pasta dish is served with seasonal pan fried Brussels sprouts and crispy bacon made from coconut chips, which tastes typically “smoky”. The easy recipe requires only a few ingredients and is made in only 20 minutes. 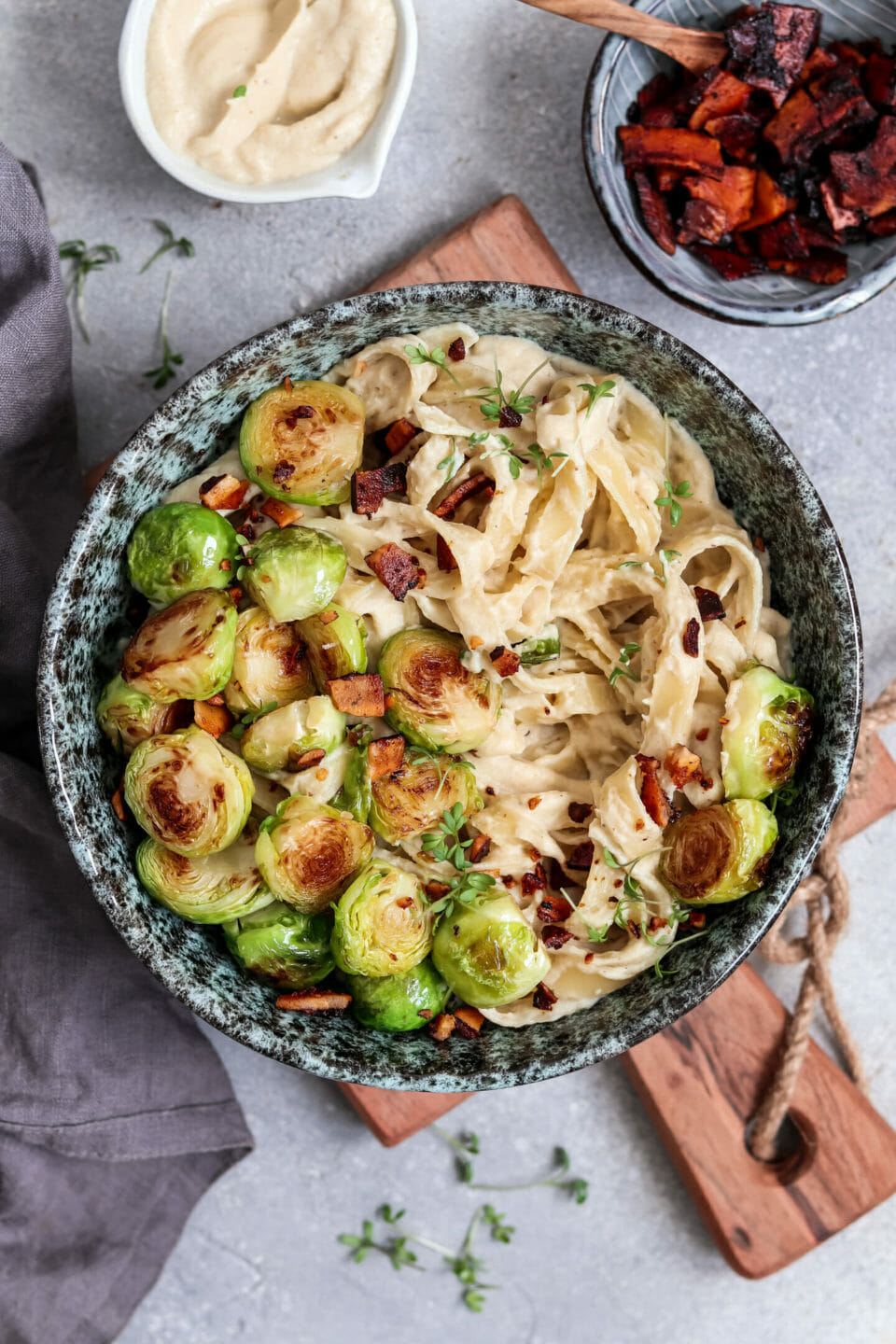 YAY or NAY? While I hated Brussels sprouts as a child, today I always look forward to the Brussels sprouts season. I like to eat it pan fried and seasoned with a little sea salt and pepper. Simple, but incredibly tasty.

The first recipe I made this season is also one of my favorite Brussels sprouts recipes: vegan Fettuccine Alfredo made from cauliflower. Cauliflower as a pasta sauce base might sound strange at first, but believe me: it tastes so delicious!

You can already find the basic recipe on my blog. In the article I also listed my biggest surprises when it comes to “hidden” vegetables in recipes ;-). The fact that I’m sharing another hidden cauliflower recipe with you guys today should be clear enough that these surprises were pretty positive. 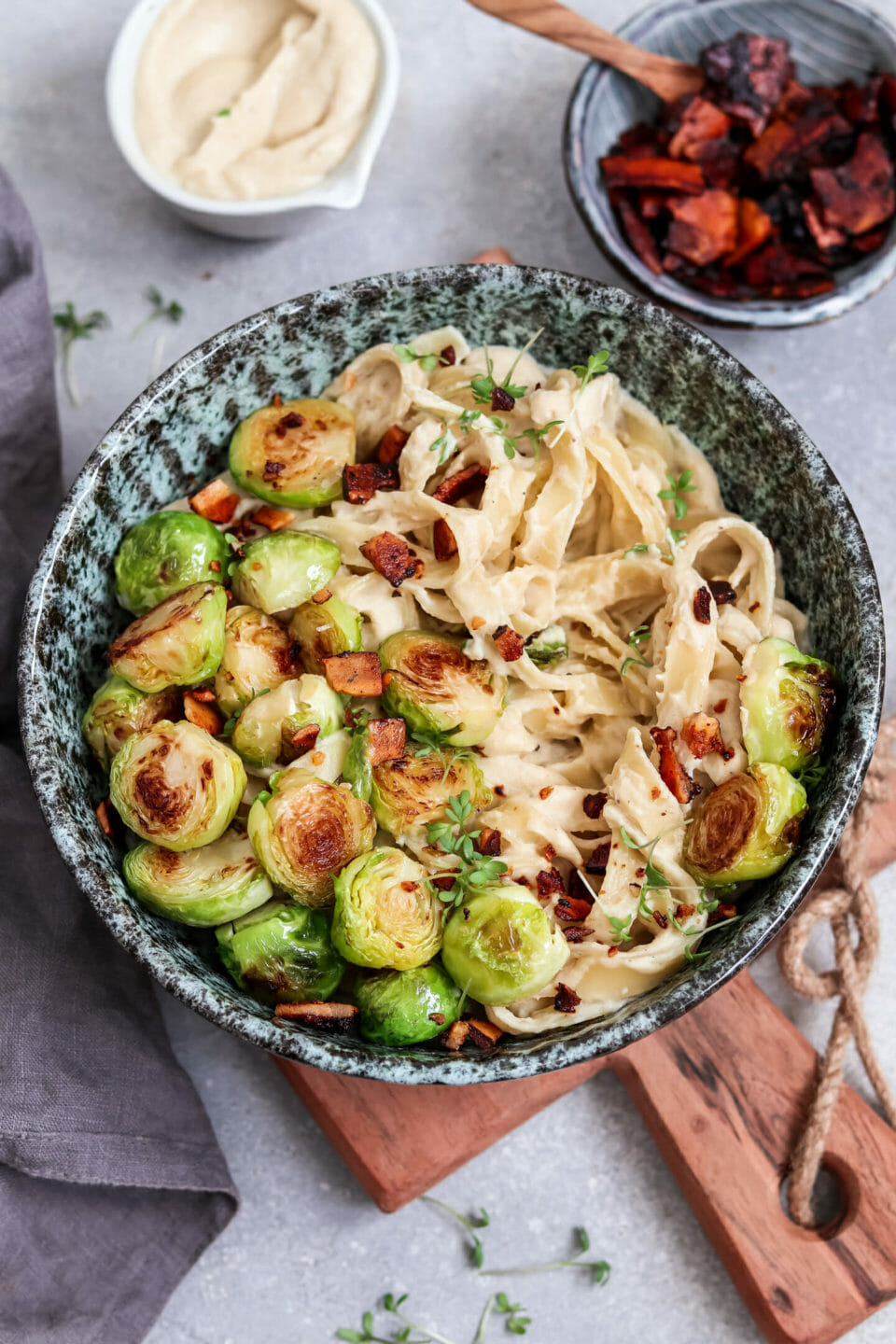 The recipe couldn’t be easier.

The base is onion, garlic, cauliflower and vegetable broth as well as yeast flakes, lemon juice, spices and vegan butter or cashew butter. First, the vegetables are cooked and then pureed in a blender with the other ingredients to make a creamy sauce. Depending on the consistency you want, you can add some water or plant-based milk.

Finally, serve with pasta and vegetables / toppings of your choice. 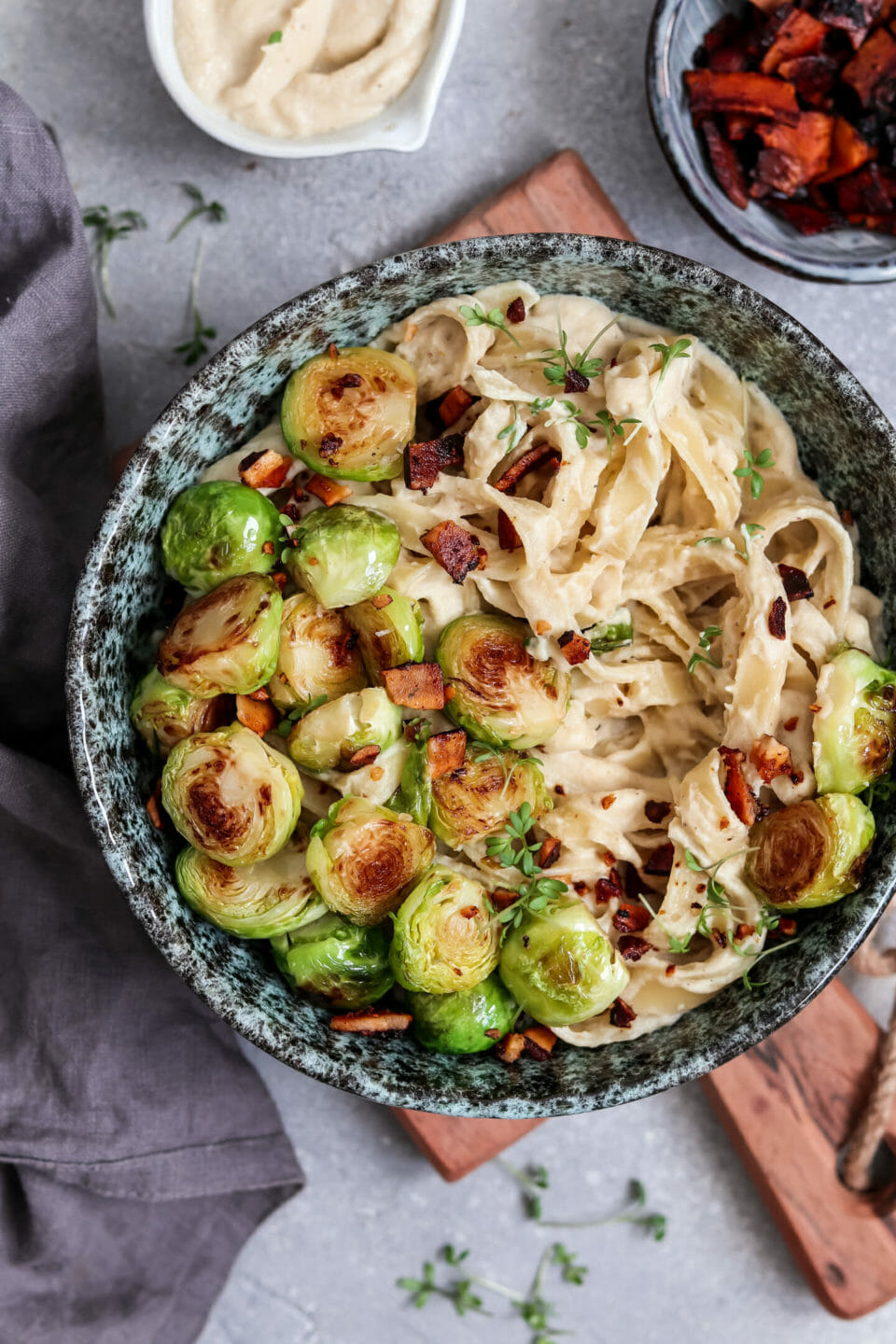 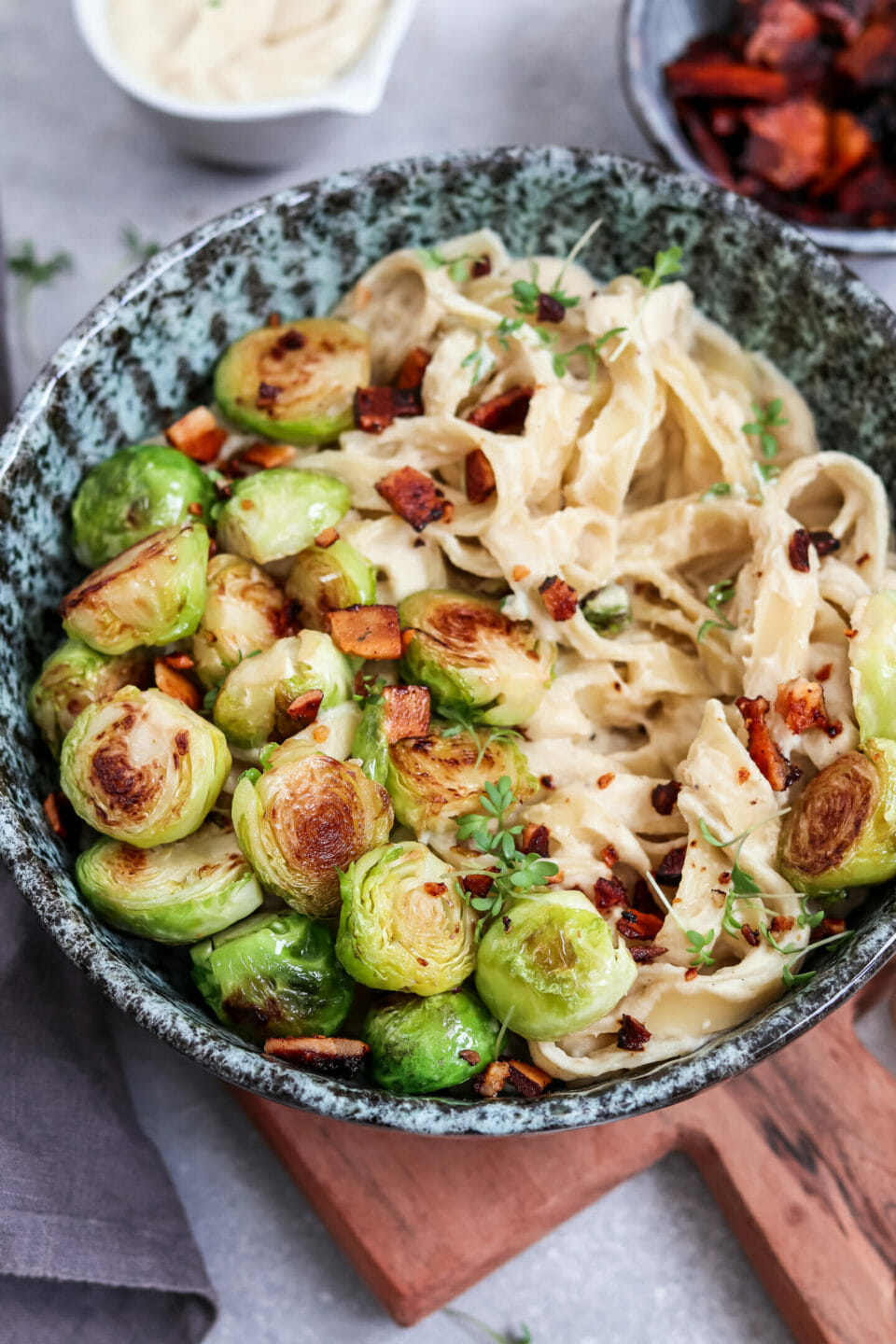 Crispy “bacon” made from coconut chips

The smoky and crispy “bacon” made from coconut chips goes perfectly with the creamy pasta dish with Brussels sprouts. For the quick and vegan version, the coconut chips are marinated in oil, soy sauce, maple syrup, apple cider vinegar, smoked paprika powder and smoked salt and then baked in the oven until crispy.

If you are looking for a tasty and quick recipe for lunch or dinner, you cannot go wrong with this pasta dish. Have fun trying it out and enjoy your meal! 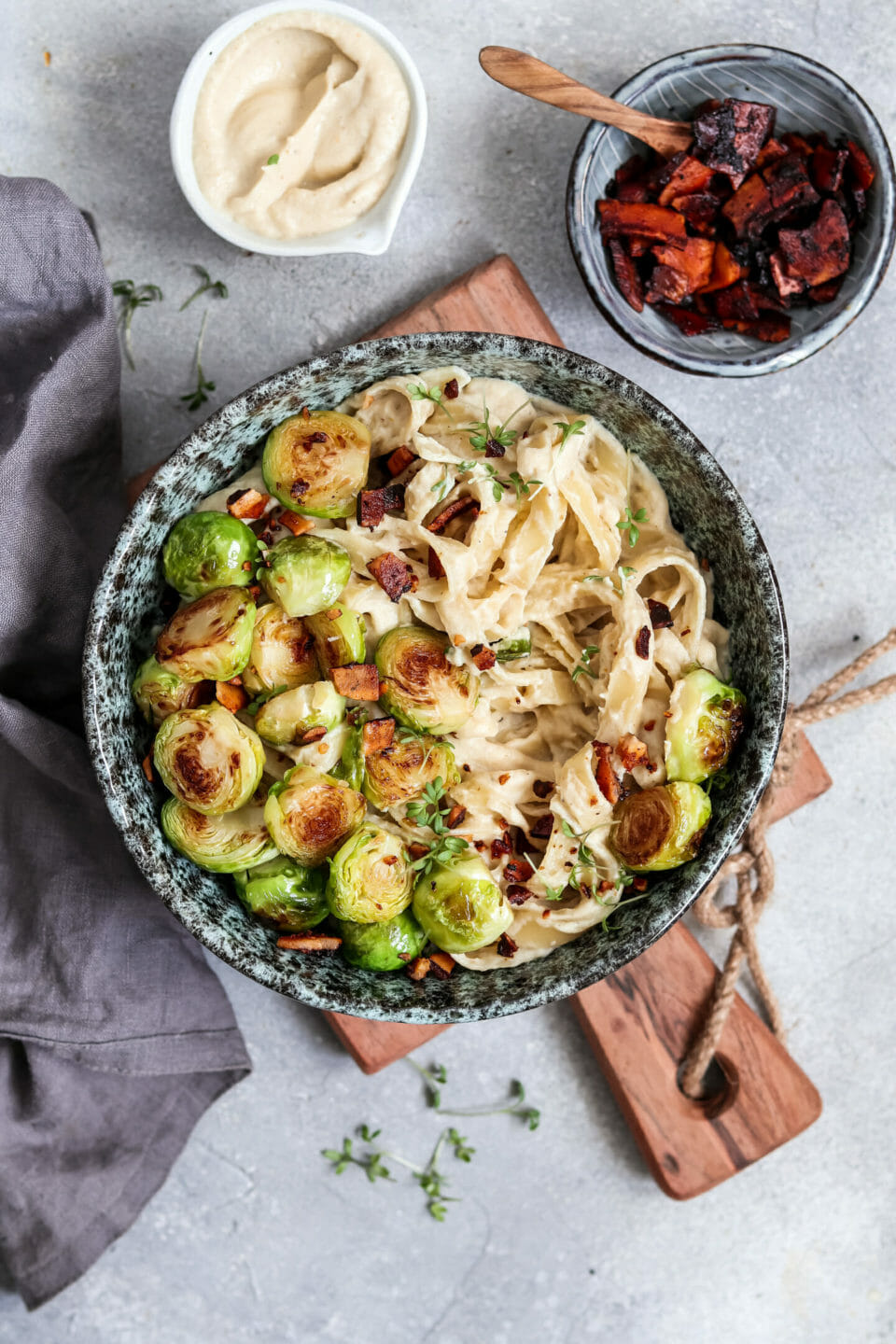 Looking for more vegan lunch or dinner recipes? Try one of these…

If you make this pasta recipe, be sure to leave a comment and / or give this recipe a rating! I love to hear from you guys and how my recipes tasted to you! If you do make this recipe, share your creation on Instagram as a photo and use the hashtag #byanjushka. Always so happy to look through your photos of recipes! 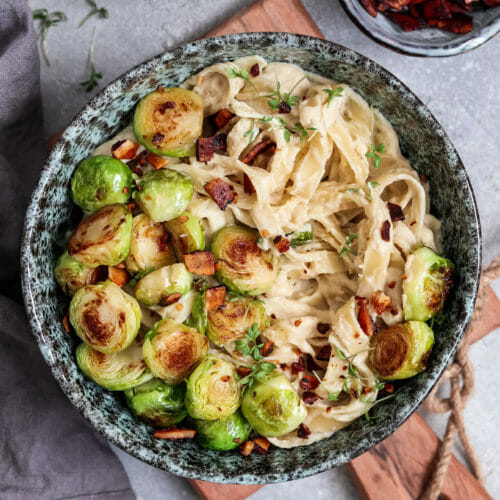