Pumpkin Porridge. Creamy and sweet oatmeal with pumpkin puree and pumpkin spice, topped with caramelized pear, pecans and almond butter. This recipe is vegan, easy and quick to make and brings you the sweetest and tastiest autumn in your breakfast bowl. 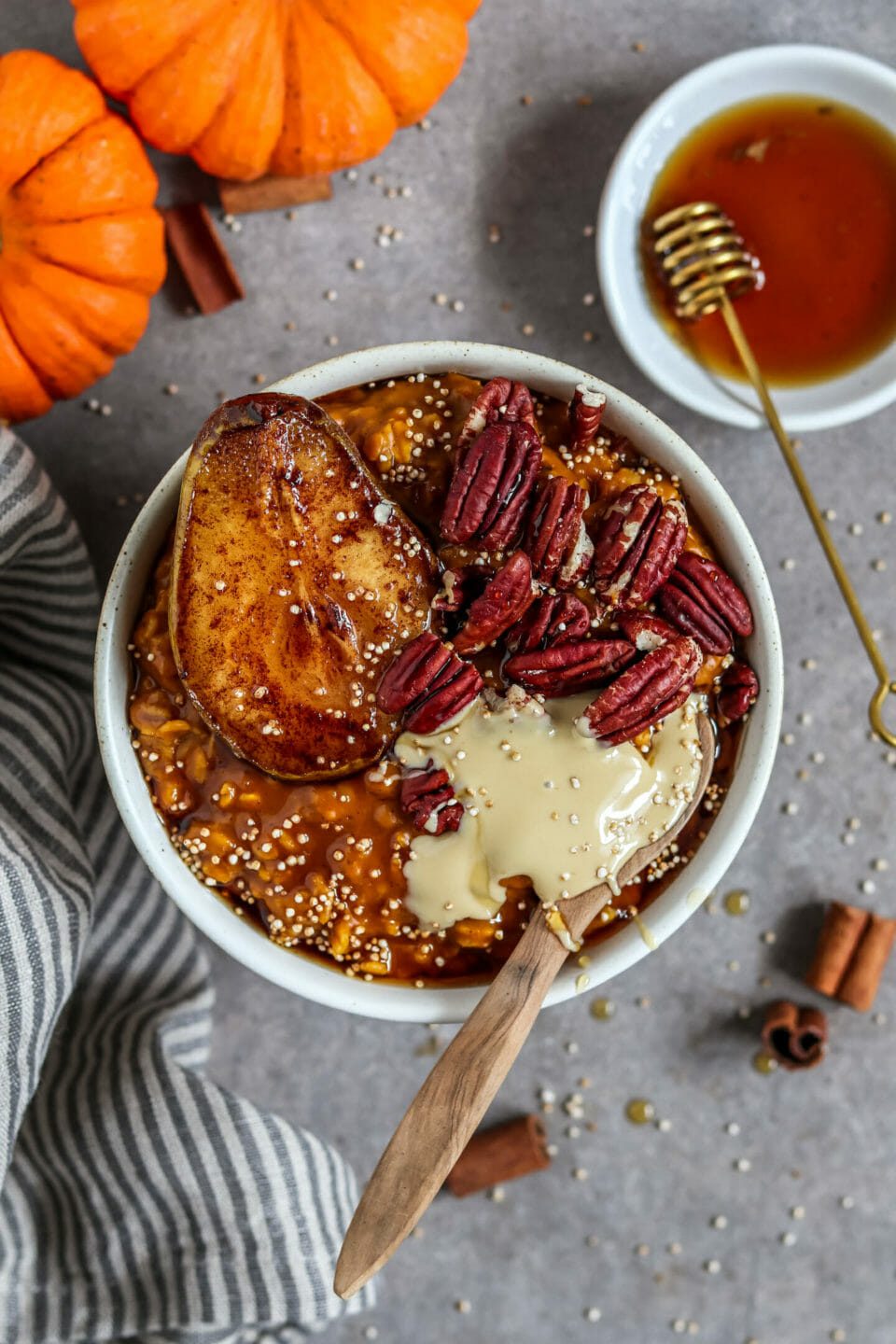 Boring porridge was yesterday! I quickly realized how delicious and varied porridge can be. Although I have to admit that I stayed away from the classic porridge when I was a child. I remember a rather boring, tasteless and colorless pulp. And so it happened that porridge was forgotten for many years.

Until I signed up on Instagram and suddenly a lot of colorful porridge bowls were shown to me. Porridge (or oatmeal) is like a sheet of white paper that you can design however you like. Translated means: the preparation possibilities are endless!

What is your favorite way to eat porridge? Which ingredients shouldn’t be missing? 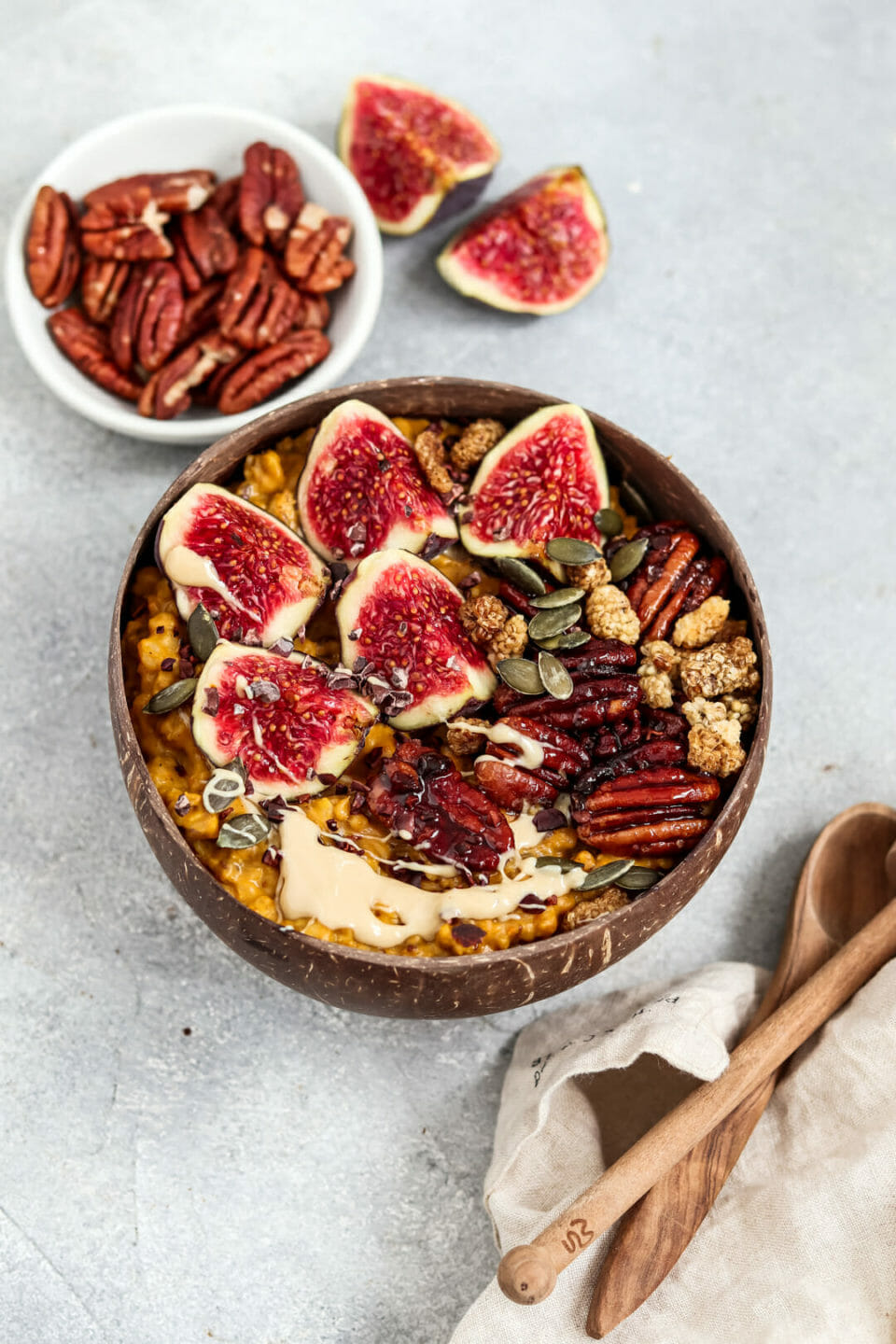 There are already many sweet pumpkin recipes on my blog. The initial skepticism about whether pumpkin fits into sweet meals should be gone ;-). Pumpkin naturally has a slightly sweet taste and is therefore great for sweet recipes. Especially in combination with autumn and winter spices such as cinnamon and clove.

I often prepare a large portion of pumpkin puree for further processing. For example for the breakfast classic: porridge. 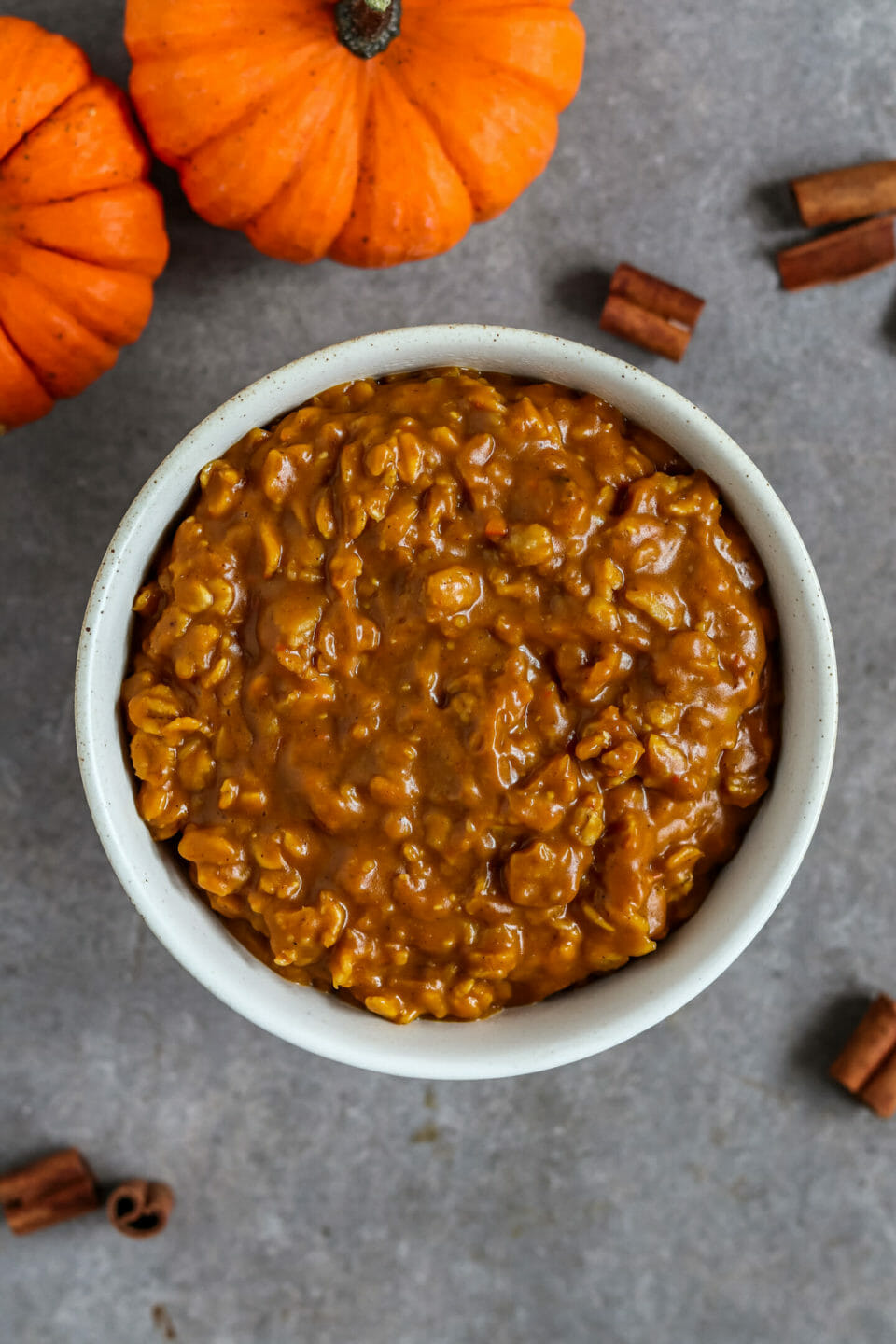 The preparation couldn’t be easier: Put all the ingredients for the oatmeal in a saucepan, bring to the boil and simmer for about 5 minutes over low heat. Then take it off the stove and let it sit for another 5 minutes. The longer it stands, the more it thickens. You can stir in some nut butter to taste. This makes it particularly creamy.

Another great idea: stir some vanilla pudding powder with water until smooth, add to the saucepan and bring to the boil. This not only gives your porridge a delicious vanilla aroma, but also thickens it, similar to pudding.

To emphasize the autumn pumpkin aroma, I season the porridge with Pumpkin Pie Spice from Justspices. Alternatively, you can prepare your own mix of spices. I’ll tell you how it works in the recipe. 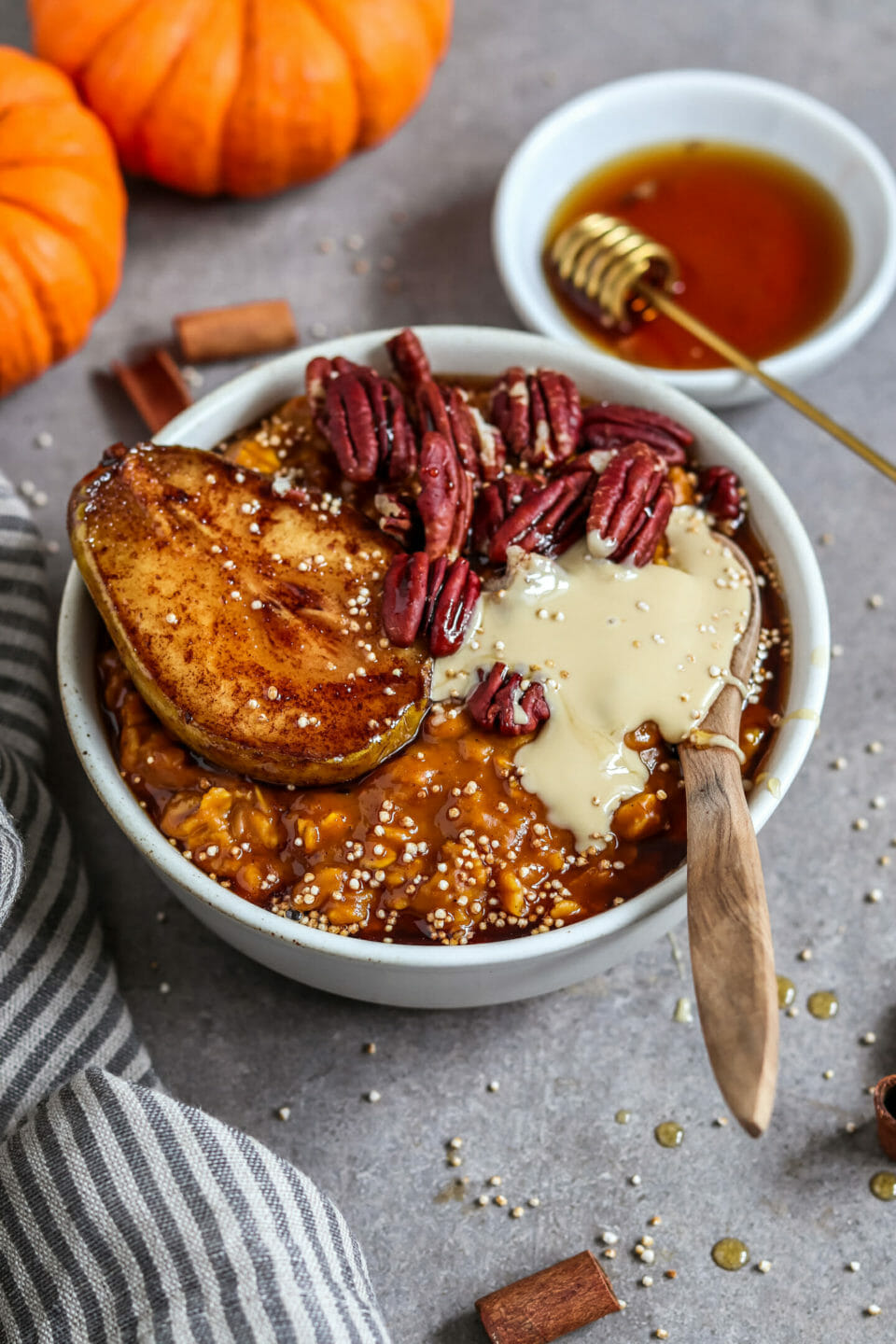 What would an oatmeal be without toppings?

It was only through Instagram that I learned how much toppings can make a difference. I like to combine the autumnal pumpkin porridge with seasonal fruit such as pears, figs or apples, nuts, nut butter or some muesli. The fruit or nuts are particularly tasty when they are caramelized in the pan. So so good !! 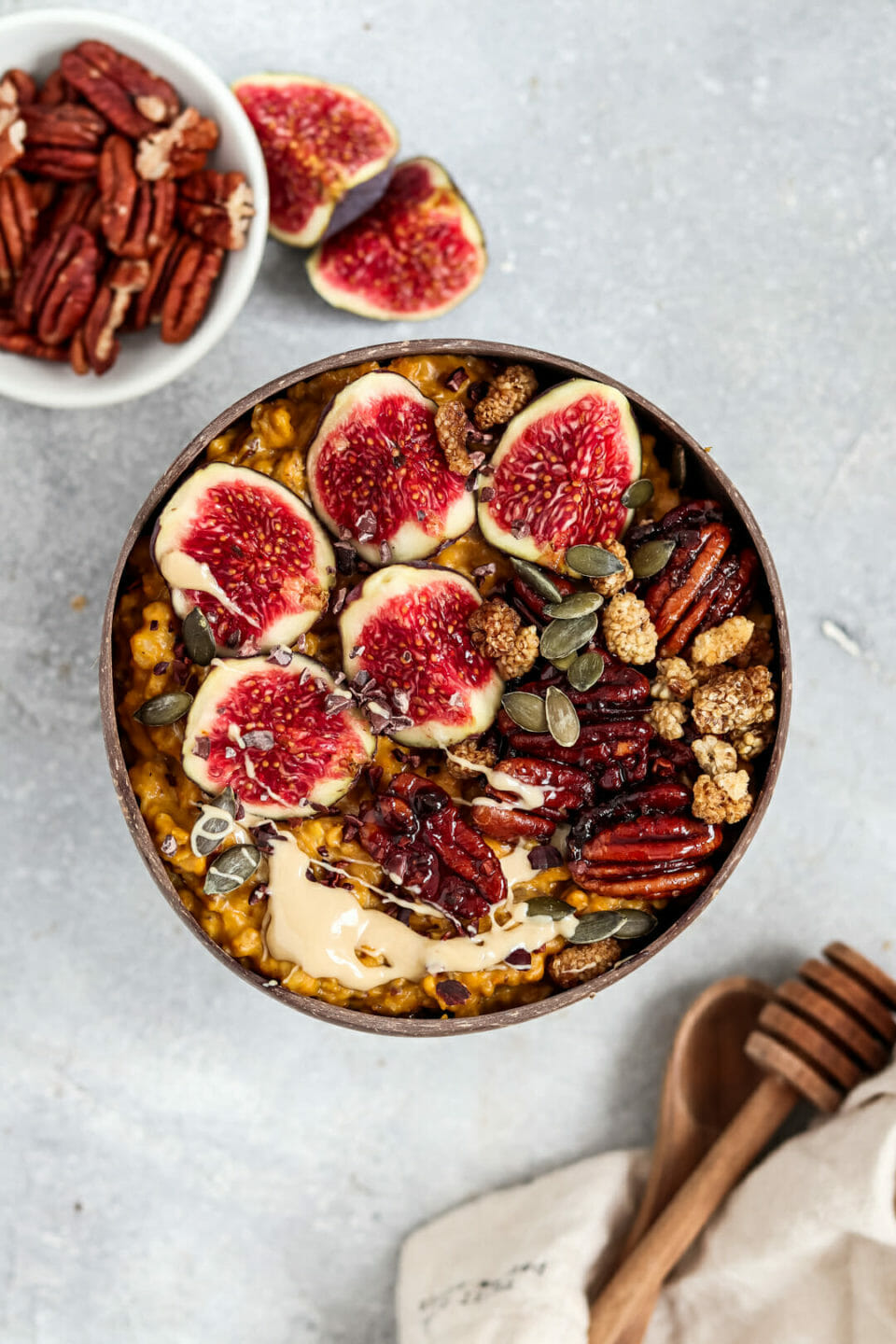 Looking for more sweet pumpkin recipes? Try one of these…

If you make this vegan pumpkin oatmeal, be sure to leave a comment and / or give this recipe a rating! I love to hear from you guys and how my recipes tasted to you! If you do make this recipe, share your creation on Instagram as a photo and use the hashtag #byanjushka. Always so happy to look through your photos of recipes! 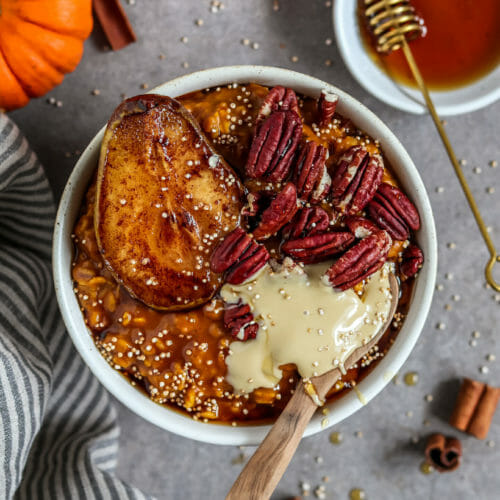